NDP Leader Ryan Meili slammed Premier Moe’s record as Saskatchewan has seen the lowest wage growth in the country over the past two years, failing to keep up with the rising cost of living.

“Life in Saskatchewan is getting harder under this Premier,” said Meili. “People’s earnings aren’t keeping up with the rising cost of living because the Sask. Party is more focused on looking out for their friends than helping regular folks make ends meet.“

According to Statistics Canada, average weekly earnings for Saskatchewan workers went up only 1.1% from December 2017 to December 2019 — the lowest rate of increase in Canada. Over the same time period, the cost of living as measured by the Consumer Price Index rose 2.7 percent, meaning the cost of living is growing more than twice as fast as wages. 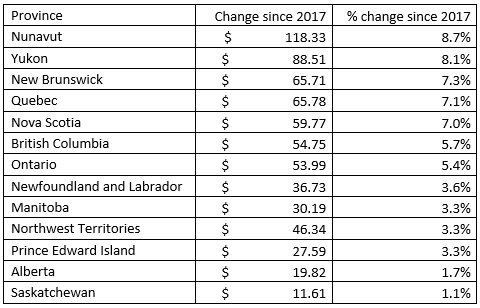 “Under Moe’s watch, we have the lowest minimum wage in the country, more than half of Saskatchewan people are living paycheque to paycheque, bankruptcies are skyrocketing, and one in four Saskatchewan kids is living in poverty,” Meili said. “That’s why New Democrats are committed to building an economy that works for everyone — including raising the minimum wage to $15 an hour.”