In the wake of recent cyberattacks against eHealth and LifeLabs, the Saskatchewan NDP is calling for a government-wide security review of Ministry and Agency sites and databases to address emerging security threats that put Saskatchewan people’s financial and health information at risk.

“What we saw in this latest breach was the predictable result of a longstanding failure to keep up with emerging threats to Saskatchewan people’s most sensitive information,” said NDP Health Critic Vicki Mowat. “There’s no ribbon cutting on making sure people’s information is secure, no big political win, so this government simply hasn’t made the data security of Saskatchewan people a priority. That needs to change.”

According to the Auditor’s 2017 Report, Volume 2, by late 2017, eHealth had not yet completed a disaster recovery plan for systems and data that the Provincial Auditor had called for a full decade earlier. Failures to apply security updates, some available since 2012, were also flagged, and some IT experts are suggesting that the gaps have persisted. When the NDP Opposition requested an update in 2018, they were told that eHealth had only laid the groundwork for a three-year plan to address the issue, and no further disaster recovery plans had been developed. This week eHealth declined a recent media request for an update on progress in complying with the Auditor’s recommendations. 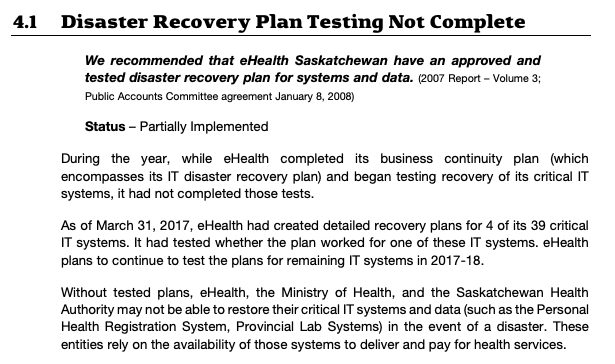 “Digital security is a fast-evolving field, and we need to be sprinting just to keep ahead of emerging threats to Saskatchewan people’s most sensitive data. Under the Sask. Party, we’re not just failing to keep up — we appear to be losing ground.

“That’s why we’re calling for a reboot: a government-wide security review of Ministry and Agency sites and databases to identify and address gaps and weaknesses. We’re also calling on the Ministry of Central Services to develop a baseline of information security best practices that will evolve as new threats emerge, and work with public entities including municipalities to stay above that baseline. It’s essential that we get ahead of these evolving threats, for the security and peace of mind of Saskatchewan people.”