Failure to invest in education a betrayal of our future, says NDP

From kindergarten through to post-secondary, the NDP is calling out the Sask. Party’s failure to properly fund education in their 2019 budget as a betrayal of teachers, students and Saskatchewan’s future prosperity.

“If you want your economy to do badly in ten years, cut funding to schools and universities -- it’s as simple as that,” said NDP Leader Ryan Meili. “That this government made such a big show of fiscal responsibility this year while leaving schools, colleges and universities dangerously underfunded and falling behind is incredibly short-sighted.” 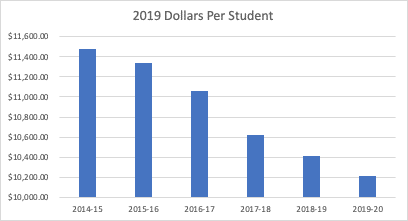 Funding per student in today’s dollars (adjusted for inflation).

Per-student funding is only about $10,200 today — hundreds of dollars per student less than the inadequate funding just five years before.

“It’s farcical to speak of ‘balance when our classrooms face a $100 million funding deficit, when you adjust for rising costs,” said NDP Critic for Education and Advanced Education Carla Beck. “The facts are clear. The $14 million dollars for supports in classrooms in this budget fails to keep pace with rising costs, it doesn’t make up for the millions cut in education in the last few years, and it doesn’t account for the 7,000 additional students in our schools since 2016.”

Adding insult to injury, the government announced Friday it was walking back already-committed funding to close Regina’s Cornwall Alternative School, a so-called school-of-last-resort for at-risk youth.

“Cornwall Alternative School has been providing extra supports to some of Regina’s most vulnerable students,” said Beck. “All children should have a chance at a decent education, including those who need a little extra support. This is a short-sighted cut that will cost far more in lost opportunity down the road.”

Beck also challenged the Minister of Advanced Education for failing to invest in higher education after another year of no additional funding for post-secondary education and with a strike looming at the University of Regina.

“This is the second year in a row the government has left funding for post-education flat,” said Beck. “Universities and colleges have been forced to leave vacancies unfilled. Students bear more of the burden through rising tuition. Students at the University of Regina and University of Saskatchewan now pay the highest tuition in Western Canada. Why is this government setting Saskatchewan students up for failure?”